I can not believe I watched the fireworks in Sydney for a third year in a row…it has to be the most amazing sight I have seen. This year I went to Barangaroo Reserve with friends to watch the fireworks. I bought tickets for $30 and I have to say I was not expecting good things as I had heard bad reviews from last years event. Somebody at my work place had been the year before and said the lines for the bar where long and they ran out of champagne before midnight.

We headed to the rocks first to meet one of my boyfriends mates who he had not seen yet over break. We met in ‘The Fortune of War’ its a very small pub and is set up just like ones back home with the bar in the middle of the room. There is usually a live band in there as well giving it a good atmosphere. After a few drinks we headed to the reserve. The gates opened at 6PM and luckily we had friends who got there straight away and secured us a spot with a view of the bridge. We got there at 7PM and it was full if they had not been there we would not have had a good spot for the night. I am pleased to say there was no lines for the rest room the bar and plenty of alcohol. We sat on our blankets for the evening watching the entertainers walking around the reserve and eating our picnics. At 9PM the children’s fireworks went off and many people left after these had ended giving us more room to spread out. Finally it was midnight and we watched the amazing show of fireworks with our friends and as usual it blew you away. We were quickly moved on after the fire works and the next adventure of getting home began. It took two hours in total with a walk from the reserve to Central station and then a walk from Sydneham to home carrying cool boxes and deck chairs. Once home a cold shower was needed and straight to bed as we had a early morning celebrating our anniversary on 1st January. 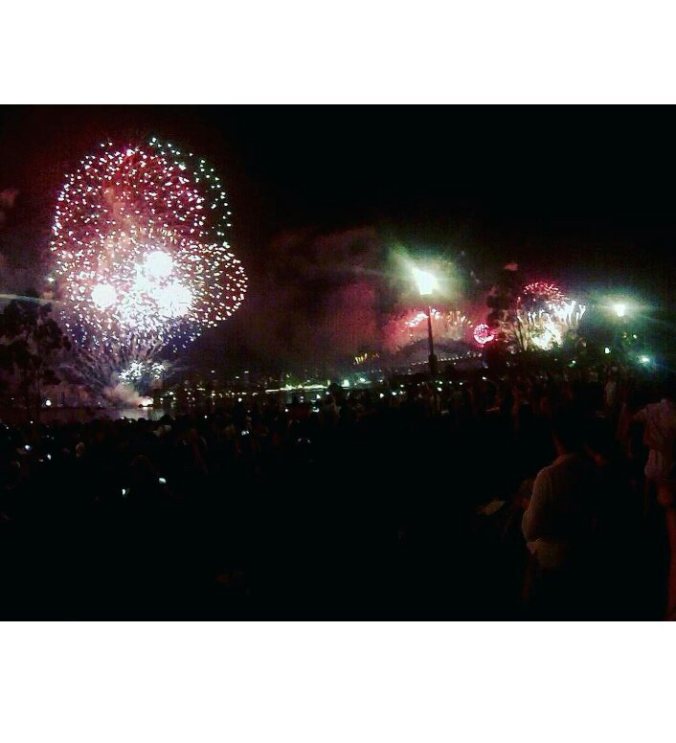