Its the time of the year when the CBD is packed every weekend with people wanting to get that perfect picture of the sky line lit up!

My boyfriend was down last weekend from his project and he had said I don’t like crowds I don’t want to go to vivid. A small min trick later I had him in the Rocks and loan behold we were technically in Vivid but without the crowds.

I am fine with crowds they do not bother me and I love the vivid festival so I really wanted to go especially as he was down from Coffs for the weekend.

We got off the train at Martins place around 5:30 so it was dark and we walked down to the Rocks and through to the Palasides. I showed MC the view from the top of the bar which is a spectacular view of Sydney and its also a different view of Sydney Harbour.

We settled in the pub downstairs near a window and we could see the Vivid lights on the Shangri – La. We were joined by a few friends and had dinner in the pub which is good pub grub. Around 9:15PM we walked around to the the Theatre Bar. Yet again another great view of the Harbor Bridge and Luna Park. It was great watching all the boats on the water with there lights on for Vivid. The bar was very quiet and relaxing.

When you come out of the bar turn left and walk down the road a little way to the steps going up. At the top of those steps is a amazing view of the Sydney Opera House Sails.

Walking back through the Rocks we got told by a passer by to go up the alley way down the side of the pub ‘ Phillip Foote ‘ there is a Vivid exhibit using 3D graphics….it looks very cool on Boomerang app. Check out the video on my Instagram Keeks9272016

I did a boat trip on Sunday with my house mate and it was fantastic. We bought the tickets through Groupon for $38 each. The boat was a catamaran and seated 30 people. You could bring alcohol on board if you wished. The boat supplied soft drinks wraps and sandwiches.

The boat was massive with room to walk about to get the perfect photo. The route went around to Darling Harbor where we caught the water show then back round to the Opera House and around the botanical gardens. Its a lovely way to experience the lights on the water. The company we went with was Sea Sydney Harbour. 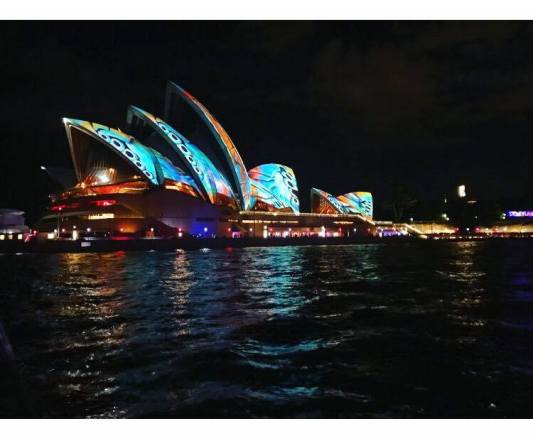 I am going by foot this week to Vivid with my friends since as MC is not a crowd lover. Once I have gone by foot I shall update this section. Hopefully going to check out the Botanical Gardens, The Rocks and maybe Martins Place!