Any three day weekend we have always tried to make the effort to get out of the city…doesn’t need to be far but its nice to escape the city life for a few nights. O Australia day weekend we had to stay in the city for the Friday. We ventured out on the Saturday for a one night escape to the Blue Mountains. The only thing we had planned was Mountain Biking. I booked a last minute Air BnB for $5o each. It was a bush cottage with a very cute decking and pizza oven.

Saturday lunch time we did a hours drive up to Penrith. We stopped off at the Cable Wake Park.  We had seen it on Groupon and know a few friends who have checked it out. The park is two big lakes with a cable track going around them both pulling wake/knee borders. One lake is for learners and another is for people who know what they are doing. MK tried his hand at the knee boarding and I grabbed a chair to watch. There is a quick safety video to watch in reception and they provide you with a helmet. You go to a wooden shed at the edge of the lake and line up with your board which you grab at the shed along with your life jacket. People make it look a lot easier then what it is. After watching some pretty big wipe-outs I was glad I had taken a seat on the side as I have 0 balance. Once Mk was done on the lake we headed over to the inflatable obstacle course for us both to try. It was loads of fun flying down the slides and going up and over the slippery obstacles. It felt like a good taste of what it would be like to go on “Total Wipe-Out”. Exhausted from the obstacle course we headed for dinner. I hadn’t looked for anywhere to eat so we just stopped in at one of the restaurants next to the cable park. “Out Back Stake House” it is an American restaurant with a Australian theme in Australia. I had eaten at them a few times when I lived in the USA so I know the food is decent. Its big American portions and I would highly recommend a Strawberry Daiquiri it was tasty.

After dinner we headed to our Air BnB for the night. It was just outside of Penrith at the start of the Blue Mountains. The bush cabin is an old art studio the home owners converted. It has board games, colouring books and everything else you would need. It has been pretty warm in Sydney on a night but in the Blue Mountains it was a cool 15 degrees. Perfect temperature for a solid nights rest. 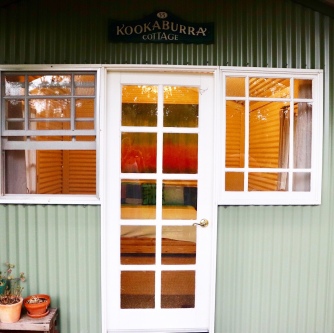 It was a early start as we had a hours drive to the meeting point of the mountain biking track. We used Blue Mountain Biking Company to hire the bikes. It was recommended to us through a friend. The company is run by a great guy called Sam. Sam gave us a call the night before with all the information we needed and where to meet him. He meets you at the start of the trial with the bikes and picks them back up. We did the Hanging Rock trek. Sam was there with the bikes nice and early. We got suited and had a quick lesson on how to use the bikes best then we were off. It was such a blast flying down the hills and up. The view at the end is jaw dropping. The height at the view point will make your tummy turn. The morning mist was still there when we arrived at the view point. I have to say Sam is a great guy and the whole operation is smoothly run. He has endless knowledge on the area and tracks. I would highly recommend using his company if you want a fun day out on mountain bikes.

Once we had dropped the bikes back with Sam we headed to Katoomba. In Katoomba we went for lunch at a cafe we had been told to check out called the Yellow Deli. It is run by the 12 tribe cult. It is a beautiful cafe all wooden interior like a European log cabin. The food was delicious. It is a place not to miss if you are in the local area.

So there you go a few ideas on some things to do up in the Blue Mountains which isn’t Scenic World or the three sisters.

One thought on “Blue Mountains”